Visit theFestival’s history section
and check out posters and spots of previous editions.

Author: Andreu Gallart
with the collaboration of Joan Jarque, Anna Aguilera and the photography by Joan Gosa.

What was the creative process for the poster like?

The poster, made by renowned designer Andreu Gallart with the collaboration of Joan Jarque and Anna Aguilera and photography by Joan Gosa, refers to the classic stories of terror and music, headed by the Phantom of the Opera. The mask as a theatrical and operatic element, but also as an object of concealment and mystery, is the protagonist of a clean and minimalist composition behind which hides a new batch of the most terrifying and disturbing cinema. Gallart is the author of the festival’s logo, and he plays with a merging of masks and fonts including two versions of the poster -in a day and night fashion-, which set a dark and ghostlike sense.

“We commissioned a Venetian mask that was reminiscent of the Phantom of the Opera but not in an exact way, as we didn’t want to tie it to just one movie. We painted it white and photographed it to include it in the poster.

To chose the typography, we did not want to continue with the neutral letters and big logo of previous editions, but instead we went to rather classic typefaces and made an ornate version, which connects you with the codes of classical opera. Then we put the word “terrormolins” so that when it interacts with the mask it takes on a greenish tone that in the popular imagination can refer us to the phantasmagorical world.

Finally, we have played with these two versions at night and during the day. Or dark and light. Depending on the version, the mask takes on a much darker look, although the ghostly tone is maintained in both. This can give play when it comes to concatenating them and making contrasts, for example in street flag-banners.” 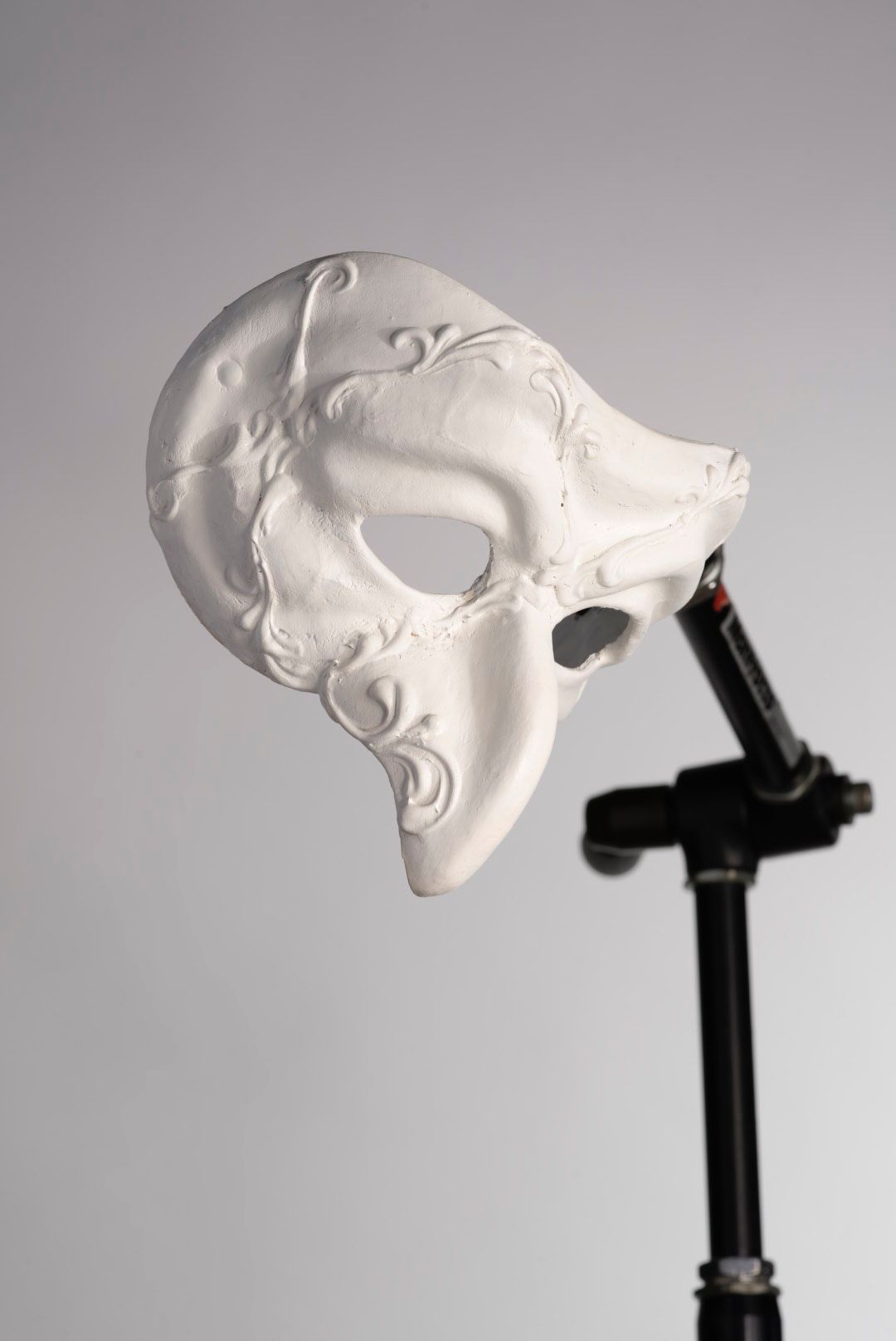 Andreu Gallard. Art director specialized in corporate image, editorial design and illustration. He combines his work as art director at the Conga studio with his own solo graphic design projects. He has been awarded several times in the Laus and Aspid awards. He has collaborated, along with other renowned professionals in the sector, in the development of various corporate image projects such as the redesign of the Laboratorios Ferrer brand, the new art direction for the Re-Read bookstore chain or the institutional communication of Infrastructures of the Generalitat de Catalunya.

Joan Gosa. Multidisciplinary professional freelance photographer. He considers himself a traveler who is passionate about the cultures of the world and the relationship between man and nature, preferring mountainous environments. He combines his great passion for traveling with his work as a sports and news photojournalist for a major news agency. He has his own photographic studio where he develops his personal and professional projects together with his clients. Collaborating photographer in sporting and social events for the international news agency Xinhua (China) in Catalonia.

Joan Jarque. Born in Molins, he defines himself as a multidisciplinary designer in love with graphic design, video-mapping and horror films. His involvement with TerrorMolins began in 2014 as a translator, and he currently is its official designer. He also collaborates in the direction of the Festival’s communication, within the communication and marketing department, as well as in the creation and realization of live video-mappings during the days in which the event is held. He works as a freelance designer and creative producer and is also a freelance graphic designer for various brands. His relationship with TerrorMolins began in 2001, when he atended the Festival with his parents, also great lovers of this appointment with the genre cinema. It is clear that horror belongs to his DNA.

Since I can remember, my life has been supported on two legs: terror and musicals. This is not to say that my family sings and dances every day or that I have survived 18 zombie apocalypses a year, but that I have always lived my life based on those two genres. I have always looked for the balance between the fun of a musical and the dark of horror movies. Although I thought that those two worlds were not destined to meet, until I discovered ‘The Rocky Horror Picture Show’.
Although I already knew it, I had never delved into that musical until I found it at the Sitges Festival in 2017 and it automatically became one of my favorite films. The occasion was spectacular, with Susan Sarandon in the room singing ‘There’s a light, over at the Frankenstein place’ and Itziar Castro acting as master of ceremonies. It was then that I understood the fan phenomenon, the passion for the film and the performance that surrounds it. This is the film that marked my style as a director, but that’s where my love for many other mythical films was born, such as ‘The Little Shop of Horrors’, ‘The Phantom of the Opera’ or any of Tim Burton’s.
After having had a lot of contact with the Terror Molins festival, declaring myself an absolute fan of the atmosphere that is created within the framework of the festival, we started working with them and the truth is that it was a pleasure to produce with lachiribita, our producer, the spot for the last year. This year we did not want to lose contact, since working with them is a joy. And, when they told us this year’s theme, my eyes lit up and the answer was obvious from our team: this year it was my turn to go behind the scenes.
When planning the spot, we sought to reflect the ‘party’ that this edition of the festival would be, and we got to work together with Ivan Herzog, the song’s composer, who did a spectacular job. Between the whole team we built what ended up being the spot, with a badass story that invites both parties and absolute terror. The process was hilarious and I couldn’t be happier with the result. But be careful, it’s “caçar valents time”.