Molins Horror Games are playful days whose objective is to offer a space for family leisure within the wide program of activities of the Festival. They focus on all those board games whose settings or themes contain some of the countless elements associated with terror and mystery. One of their strengths is that they have the presence of publishers, being themselves those who explain their games to attendees. In addition, since the second edition, each year we propose a different theme that provides another look at board games.

The Molins de Rol role-playing and board games club are the soul of the event, as they prepare the games and dedicate the whole day to making the games possible. The other great reason for our success is undoubtedly due to the volunteers and demonstrators who collaborate in the development of the conference.

Board games bring together a group of people to collaborate or compete, either with the intention of achieving goals that will lead them to victory or simply to enjoy the moment with their people, their friends, their family. Our main goal is to bring together more and more people who want to discover a different way to sit at a table. Our intention is to continue growing and demonstrating that board games are a unique tool for growth and challenge, education and fun.

Started in 2017, we are really happy with the response it has had every year. Both for the increase in people who have visited us and for the unconditional support of so many publishers who have wanted to participate. We invite you to enjoy our board games for the whole family, for the most demanding ones or for those looking for new playful experiences. See you at the tables!

The history of board games into to periods : up to the 20th century and contemporary games. Until Monopoly, games were usually two-player, strategic and abstract, although in a chess game two medieval armies face each other, with the infatry on the front, the cavalry and artillery last and the king heavily protected. Now, not only do we have the largest offer we have ever been able to enjoy, but games tell stories, like in literature or cinema, in games there is narration, not just succesful mechanics. It could be said that there has always been a narration in a game, but unlike now, where players were the protagonists.

To be more specific, games can be divided into three periods: 5000 BC-1840, the year chromolithograpy appeared; 1840-1960, the year Sid Sackson, dean of contemporary games, started to publish games; and right now. In the long century of the second period, the great change was that games went from being played only by nobles and rich people to be a part of the daily life of the new middle class, thanks to the welfare society that would be implemented in the 20th century and thanks to new technologies that allowed everyone to have a fight or a game of The Goose.

To explain it in a simple way that we are in the best moment in history in for board games, we need only say that contemporary games are, for their themes and mechanics, infinitely superior to classic games. Intinitely? Yes, without any doubt. And not because the long tradition of games is mean feat, but because the great ideas of always (those that make chess, checkers, Go, mancala, backgammon, bridge, parcheesi, dominoes, Scrabble… and up to fifteen more immortal) have increased and now we have more than fifty: majority games, cooperative games, worker placement, push your luck, auctions, deduction, area control, card drafting, set collection, wargames, role-playing games, modular board, different victory conditions, variable powers, simultaneous play, real-time play, secret objective, party games, tile placement, programming, card driven… to mention just a few of the rich mechanics found in games since 1960.

As for the themes of the games, the narrative could not be otherwise: now, any part of life or fiction can be turned into a game, from politics to war, from humor to talking for the sake of talking, from economic management to ancient civilizations, from rail transport to pirates, from science fiction to zombies.

In the happy crossover between new mechanics and new themes, the “Molins Horror Games”, a festival within the Molins de Rei Horror Film Festival, make all the sense. Go, you will find yourselves fighting together against the primordial ones (to Arkham Horror, by Richard Launius and Kevin Wilson or to the call of Cthulhu, by Sandy Petersen) or against a mountain of zombies (to Zombicide, by Raphaël Guiton, Jean-Baptiste Lullien and Nicolas Raoult). Speaking of zombies, don’t miss the addictive Zombie Dice, by Steve Jackson or Zombies!!!, by Todd and Kerry Breitenstein. More possibilities: fight alone, in extreme conditions, against evil in various forms, in Claustrophobia, by Croc, in Doom, by Christian Petersen and Kevin Wilson, or in Full Moon, by Servando Carballar; play a werewolf in the fun The Werewolves of Vallnegra, by Philippe des Pallières and Hervé Marly; become a lovable vampire in one of the best role-playing games, Vampire: The Masquerade, by Mark Rein-Hayan; go find Dracula and you yourself will know what you have to do, in Dracula’s Fury, by Stephen Hand and Kevin Wilson; try to escape from a dungeon full of monsters, in Dungeon Twister, by Christophe Boelinger or in Gloomhaven, by Isaac Childres… Fortunately, the options are endless. 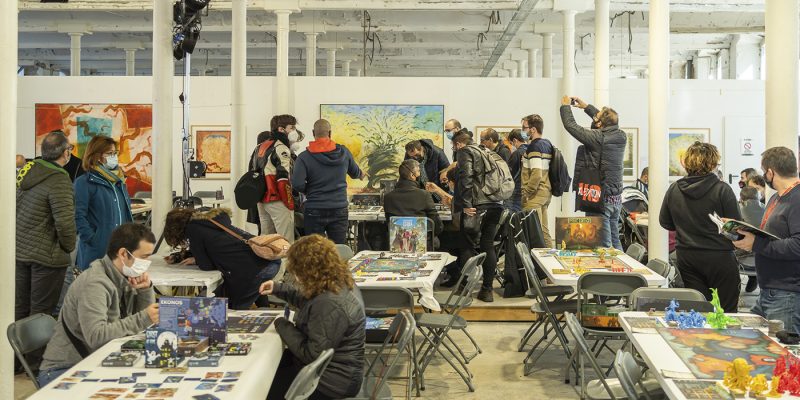 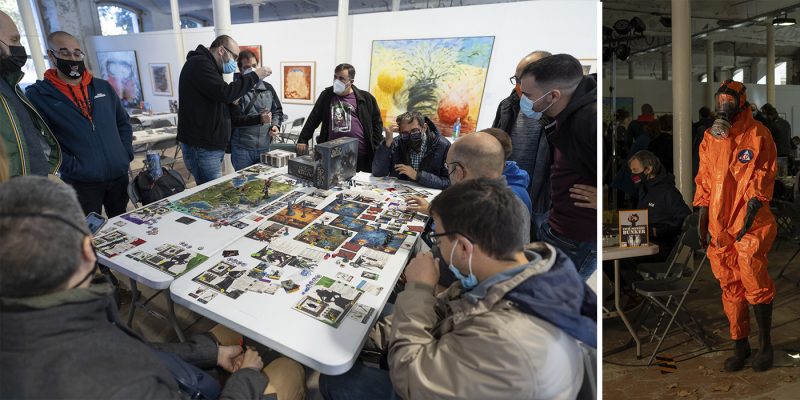 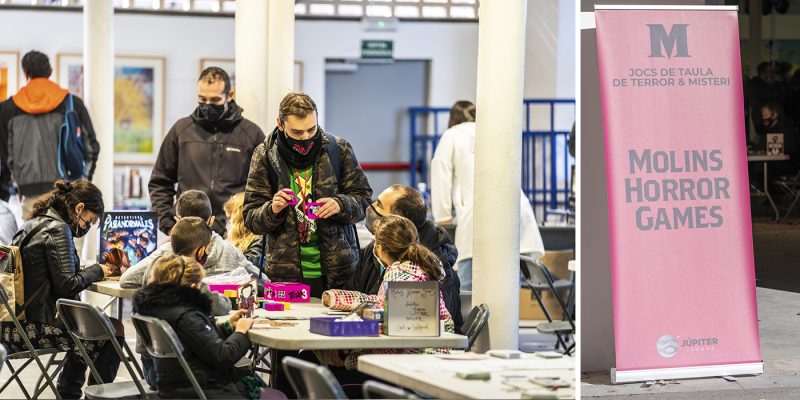 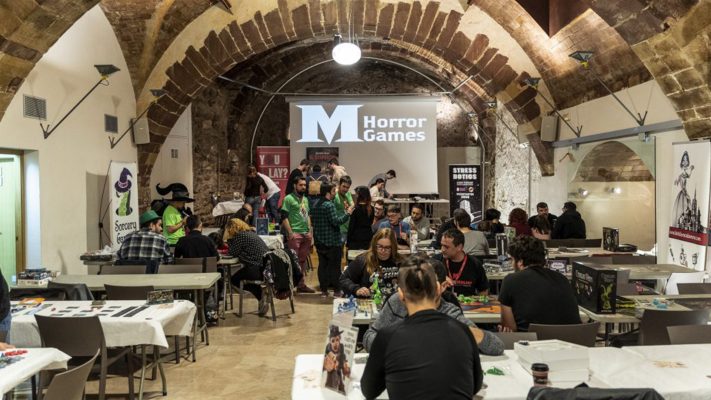 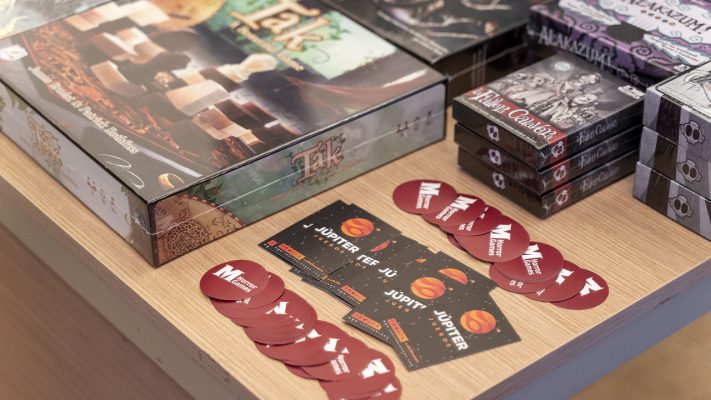 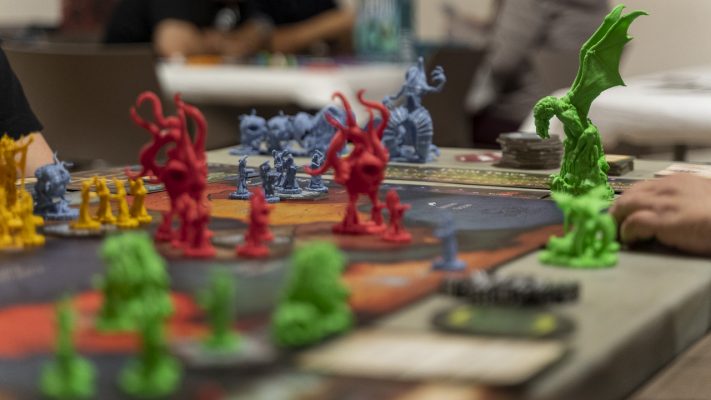 Recreational days of board games

Board games related to mystery and terror, for boys and girls and also for adults and not so adults. A meeting point both for people who do not know this hobby and are curious to try it, as well as for those who are already experts and are interested in discovering new games, with novelties brought from Essen’22, the international board game fair that celebrate in October. Includes a live radio show.

The Molins de Rei board game club: Jugones MdR collaborates with Terrormolins and will help explain all the games that you can learn and enjoy throughout the day.

A different way of leisure, very fun and that has a strong social and educational component. Come and enjoy board games with your friends and your family. See you at the tables!

Terror, mystery and many more surprises

The Jugalia board game store in Sabadell has taken the step to being a physical store. The store is located in Sabadell and we can enjoy it at Molins Horror Games with a sample of the horror and mystery games that we will have throughout the day and many more surprises. 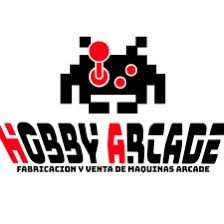 The video game store Hobby Arcade in Molins de Rei participates in the Molins Horror Games with two recreational arcade machines with horror games and we can also enjoy a sample of the products they have in their store located on Carrer Lane. Its person in charge, Daniel Muñoz, will be during all the days attending to all and all who want to consult any terrifying doubt.

This year we will have games from Asmodee, Devir, 2 Tomatoes, TCG editorial, Maldito Games, Bumble3ee, Do It, DMZ, Arrakis, Mas Que Oca, Devir, Melmac Games, Mercurio, Tranjis Games, Dracoideas, Zombie Paella, Átomo Games, GenX, Invedars, Looping games and many more. In addition, as we have said, we will enjoy some of the novelties that we have been able to see at the most important fair for board games on the gaming scene: Essen 22.

It is already a tradition to invite many board game clubs from our closest counties as well as from Barcelona. For this reason, this year we are especially excited to have “En Peu de Joc”, a publisher based in Hospitalet that publishes board games in Catalan. Molins Horror Games is committed to culture and the Catalan language. They will have all the board games they publish throughout the day and at the same time you can buy them to later enjoy them at home.

A different way of leisure, very fun and that has a strong social and educational component. Come and enjoy board games with your friends and your family. See you at the tables.

This year we are visited by the publishing house Synergic Games with the prototype of “Harakiri: Blades of honor”, GDM, 2 tomatoes, Bumble3eeand all its news. Also the publisher Tempo Games with their “Runaljod: the sound of the runes”, Do It , Games4gamers, DMZ with “ADELE” and the author of the board game, the designer Lluís Collelldemont. With the presence of the designer David Velasco with all his “Annunnaki” collection. We will also have games of Maldito Games, Mas que Oca, Devir, Melmac Games, Mercurio, Asmodee, Zombie Paella, TCG editorial, Dracoideas editorial, Token Synapse, Arrakis, Gen X editorial, Tranjis games y Looping games.

The board games club of Molins de Rei,Jugones MDR,collaborates with the TerrorMolins and will help in the explanations of all the games that can be learned and enjoyed throughout the day.

Throughout the day we will have the board game store of Júpiter Juegos Barcelona, where you can buy all their games present in Molins Horror Games, as well as others from the publisher. 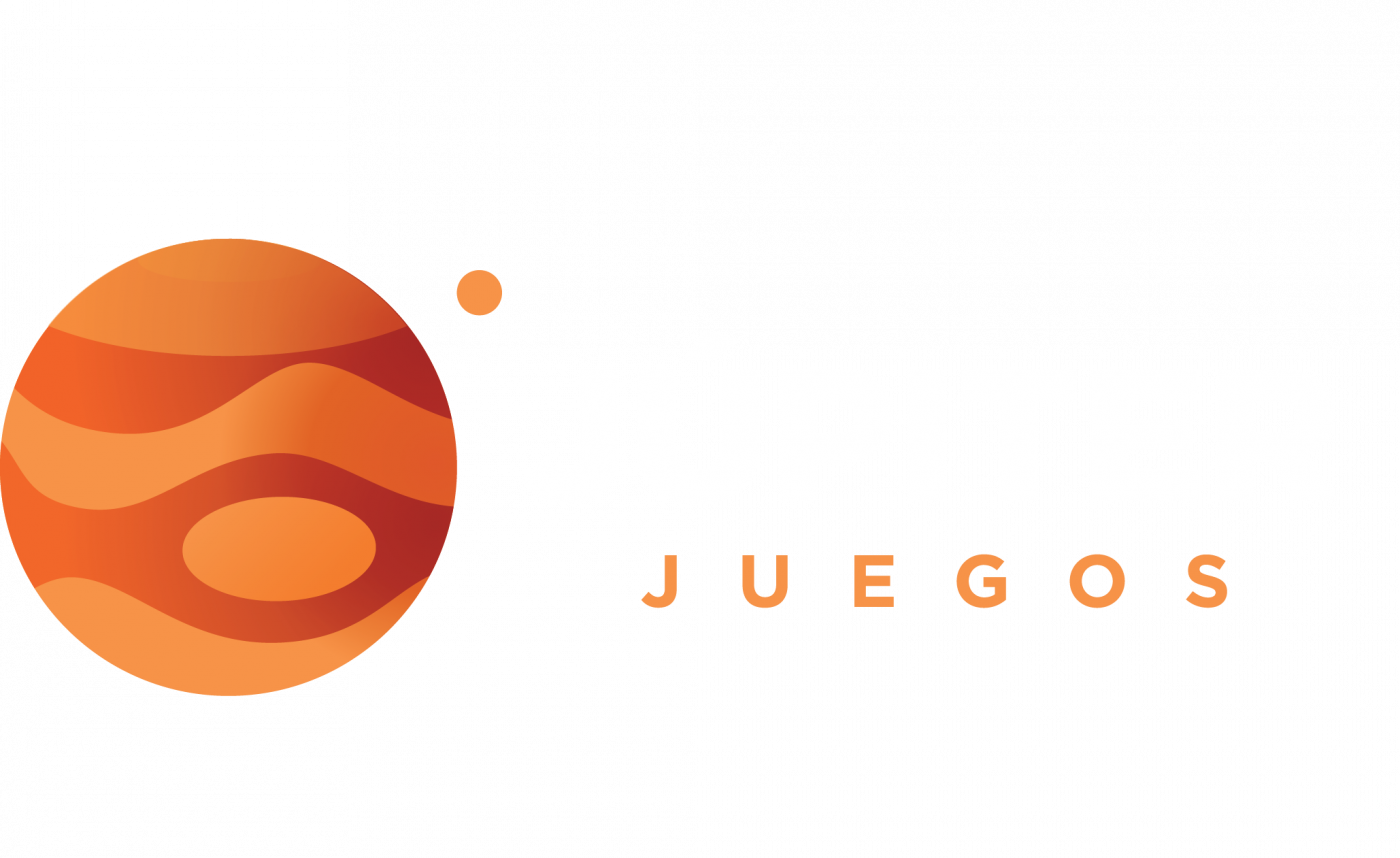 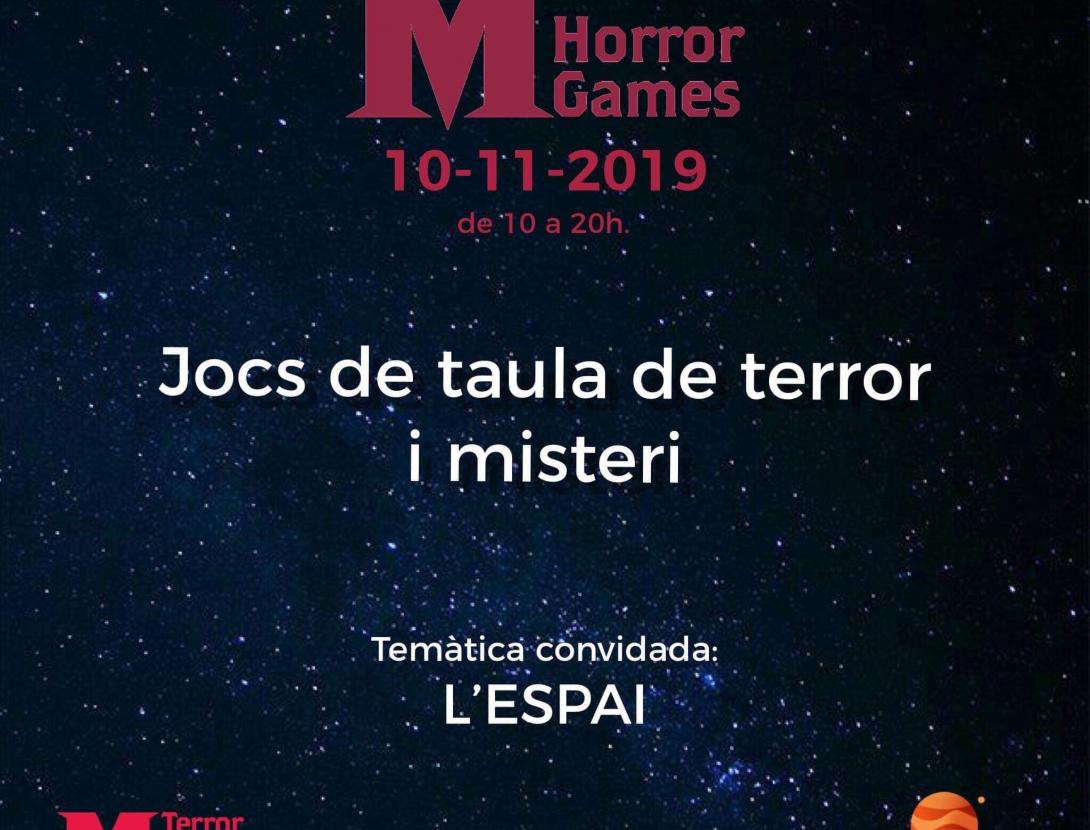 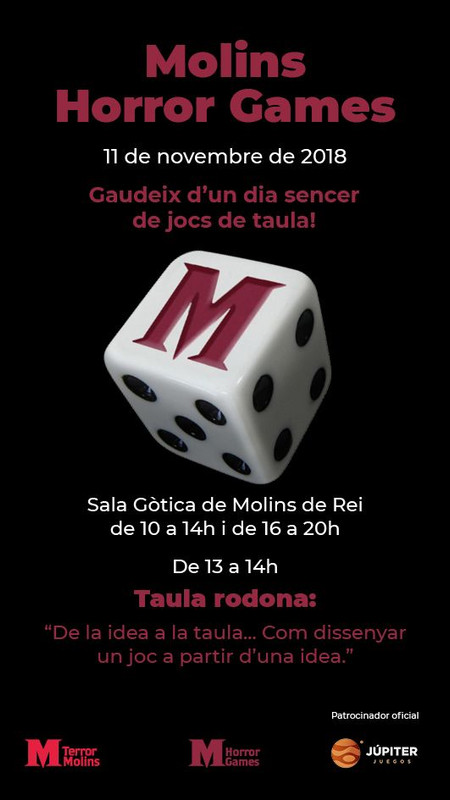 Acció>Cinema is an initiative launched by the film festival coordinator Catalunya Film Festivals (CFF), in [...]